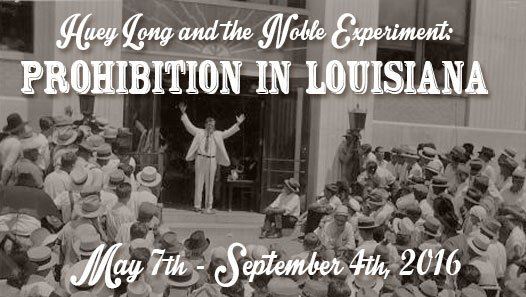 On January 29, 1919, the U.S. Congress ratified the 18th Amendment to the Constitution, which banned the manufacture, transportation, and sale of alcoholic beverages within the United States. Prohibition became the law of the land the following January 1920. At a time when women remained disenfranchised, this initiative to prohibit intoxicants had been in the works for nearly a century. Groups such as the Women's Christian Temperance Union and the Anti-Saloon League led the charge to protect women and children from over-indulgent husbands who were squandering their earnings in bars. For this reason President Herbert Hoover wrote, "Our country has deliberately undertaken a great social and economic experiment, noble in motive and far-reaching in purpose." This "Noble Experiment" had unexpected consequences and found little support in Louisiana.

Although Huey Long was not the first Louisiana governor to contend with Prohibition, alcohol consumption was rampant in and out of the state house during his tenure. In fact, when questioned on what he was doing to enforce Prohibition in Louisiana, Huey replied, "Not a damn thing!" Tales of the governor himself enjoying a drink, or few, are not hard to come by. This exhibit explores what happened during those "dry" years in the "wettest" state in the U.S.